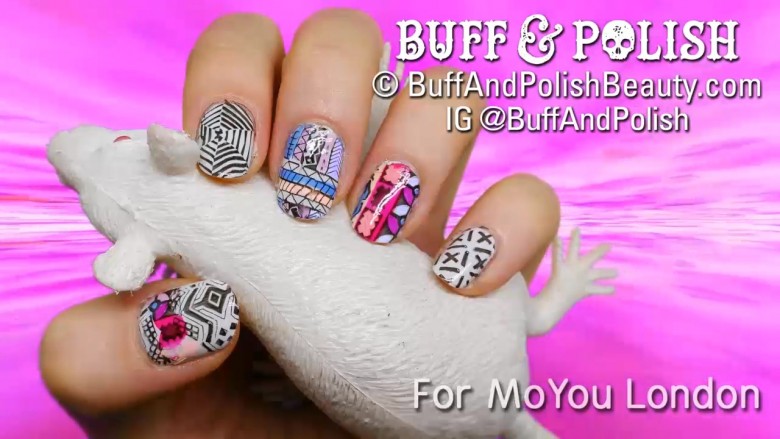 So I decided to enter the MoYou London video contest for something to do and because I finally had a working light and camera… and no internet, thanks to the Trolls of Misfortune. Those pesky little shits have wreaked havoc on everything in the last two weeks. Not exactly what I had needed to cap off an already under-average year, but alas…they were determined. It was a good excuse to get creative. The goal was to create a 60 second or less video as such:

We want you to create a cool video based on ANY of our MoYou collections, whatever one inspire you the most! The video should include a MoYou plate/plates and stamping. It should not be a mani tutorial and should not be longer than 60 seconds. You can submit you videos between the 20th-26th July. But here’s the best part..the winner will receive TEN PLATES from any collection!! (subject to availability)

Seemed like a bit of fun to get my tired brain off the arduous tasks inundating me and into being creative again. Challenge accepted! Since there hasn’t been any time for that sadly. If it hasn’t been gear that wasn’t working, it’s because I’ve been exhaustedly doing 502 tasks with half the things I really needed that could not be avoided. And for all the help I was offered, literally one person helped me – and it wasn’t the several who’s job it was to do so. Lazy and selfish is what that is, but used to it with this lot. At least I think I am nearing the tail end of that. So I took some ‘Me time’ since I deserved it.

I chose the Explorer collection of plates and given I like to explore various things thought I could make something that explores the weird and wonderful as the more brave explorers are apt to do. Why not explore the creepy worlds?

Props at the ready I set about making it. And it took far far longer than I’d expected as always those things do. Especially when you do stop motion AND claymation scenes. My internet was down as the modem and router both died a tragic and sudden death, so that hampered the final result somewhat. I would have liked it a little more polished. But I think it’s decent enough. The brief was pretty broad. So what do you think?? Comments are welcome 🙂

Buff & Polish is now on YouTube!
Christmas in July?